ORIGINAL SONG: "In the Jailhouse Now", Jimmie Rodgers, 1928, recorded by many artists, including Webb Pierce, Merle Haggard, Chet Atkins and Leon Russell; a somewhat different version was recorded by Johnny Cash. Most recently the song, as performed by Tim Blake Nelson and The 'Soggy Bottom Boys' appeared in the filmscript and on the soundtrack of the Coen Brother's film "O Brother, Where Art Thou?". Check out the YouTube video here.

SONGLINK: See the version of this post designed for ukulele and guitar players on our lyrics-blog 'SILLY SONGS and SATIRE' here. (If you haven't been signed up for that source of lyrical wonderment but crave entry, leave a comment here including your email, in strict confidence). 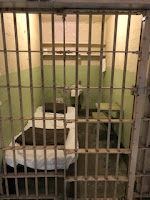 
(to the tune of "In the Jailhouse Now")

I had a friend named lobbyin’ Paul
Misdemeanors? really quite small --
He helped out Putin's vassal in Ukraine.
Got up the nose of Mueller
His sentence just got fuller;
(He'd worked a while on Trump’s ‘Sixteen campaign).

A witness-tamper tale; they done revoked his bail.
Those judges learned the facts
'Bout mortgage fraud and cheat-on-tax --
He's in the jailhouse now.

Paul warn't no copperator,
As Mueller found out later,,
Paul figgered he'd get pardoned by the Chief.
His partner Rick keeps scattin',
There's some that call that rattin',
Rick knew that Paul's the one who'd get relief.

Gates worked for presidents,
But turned 'state's evidence',
A short time will be spent
For launderin' and embezzlement.
He's in the jailhouse now.

Before 16's election
Don’s standard for selection
Was helpers that were loyal and quite tough. 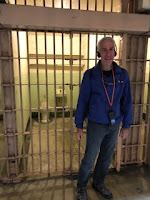 They'd had some indiscretions,
But unlike Jeffie Sessions,
They wouldn't chicken out when things got rough.

Good guys like Michael Cohen,
Mike Flynn and Roger Stone,
And here I'm being blunt.
Collusion? No, it's a witch hunt.
Let’s lock up Hillary soon.


HOLD THE FORT for an IMPORTANT NOTICE. Our two blogs are now being joined by a third member, a dream for those who want a source of poignant humour tinged with eco-sensitivity and photographic ingenuity delivered to their email queue daily.
"DAILY ILLUSTRATED NONSENSE" draws much of its source material from the collections of illustrated verses which are inspired by the world around us on the current blog;  admittedly, those posts can get rather long and ponderous as more material presents itself. On the new blog, each daily posting will have a single focus illustrated by blog-editor Giorgio Coniglio's iphone-camera revelations, by terse original poetry, and by references to impeccable and awesome internet sources. Best of all, they can be appreciated within two minutes at most, don't involve solving puzzles or dismantling  words, and it's easy to unsuscribe.
If you want to access these essential bits-of-fluff daily, the best approach is to subscribe by entering your email (harmlessly, it's protected!!!) into the 'gadget' at the top-right hand of one of the new blogposts.

See you daily, or as often as you like, on-line.
Posted by Giorgio Coniglio at December 20, 2019