CARTOGRAPHY involving Canadian cities, towns and hamlets - real places where Canadians live. These NAMES were selected from thousands of such geographic identifiers because of their funkiness, i.e. amusing nature, based on implied or speculative meaning of the shorter English (and French words) comprising the geographic identifiers. The aim was to provide a set of REAL placenames, to which IMAGINARY PLACENAME SETS, concocted by the author, could be compared.
DATA, MAPS and GEOGRAPHIC INFORMATION COMPILED: by Giorgio Coniglio, May 2017.

EXPLANATORY NOTES
A number of previous posts on this blog involve anagram-based wordplay which could be called Canadian Creative Cartography. If interested, you might take a look at these other posts that use geographic and lexicographic tools in the pursuit of structured meaninglessness.
post #33: "Collaboration between Johnny Cash..." Anagrams of
P-A-L-I-N-D-R-O-M-E-S.
post #38: "Surprisingly High Approval Rates..." Anagrams of
R-E-P-U-B-L-I-C-A-N-S.
post #51: "Canadians Support IMPEACHMENT, Too." Anagrams of
I-M-P-E-A-C-H-M-E-N-T.
An important observation made in developing these sets of fantasy place-names, despite the constraints imposed by the wordplay rules, was their similarity to real (or as we Canadians frequently say "actual") places.

CRITERIA for SELECTION
So, here were the criteria which we used to select these REAL place-names from among the tens of thousands of possibilities.

1. A degree of funkiness achieved by unusual or unexpected incorporation of real words in English (or sometimes in French, with translation shown in italics, e.g. Crapaud PE toad). Names derived from surnames or old world geographic designations were usually avoided.
2. An entry in Wikipedia was available to confirm the existence of the place as a currently-inhabited (year-round) entity. On each of the 4 maps of "towns and hamlets (villages)" the linkable status with articles in Wikipedia is shown by underlining. I regret that the links are not active in the jpeg-formatted slides, but you can copy/enter them in the blog search-bar at the top of the page.
3. The current population could be construed to be greater than 50. Wikipedia entries, national census data, and provincial demographic sites were used for verification. Ghost-towns, e.g. Snag YT, although of historical interest, were excluded.  Intriguing geographic names, unaligned to a human settlement, e.g. Crotch Lake ON, were noted but not included. Many compelling place-names e.g. Stoner BC and Congress AB, were omitted as their current population was too low or could not be confirmed. Unfortunately, the Maritime Provinces (NB, PE and NS) are notorious in having only stub entries in Wikipedia for unincorporated villages; these do not provide population figures, so dozens of such sites had to be bypassed for our purposes.
4. Out of respect, First Nations reserves and settlements were excluded. Many of these places have names in English or French that, although extant, were based on misconstrued or misrecorded designations. Interested readers may find a number of relevant websites, e.g. List of Indian Reserves in Canada - Wikipedia.
5.  With population growth and a wave of restructuring in the last few decades, many established dwelling-places have been amalgamated recently into adjacent urban agglomerations or "rural municipalities"; their current political status may vary from quasi-independent to totally merged. Such place-names where relevant have been designated by an asterisk (*). 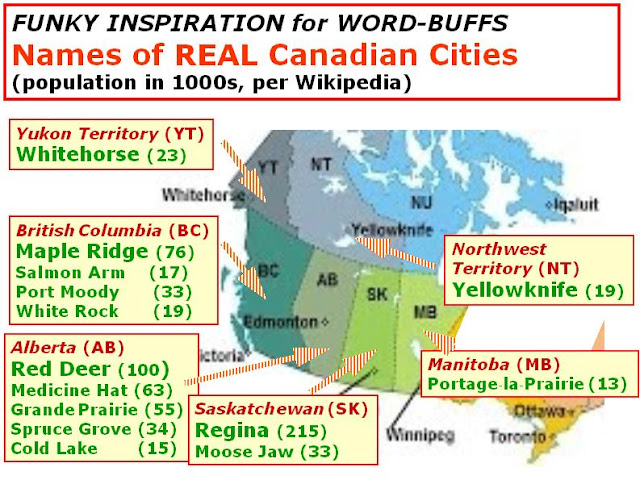 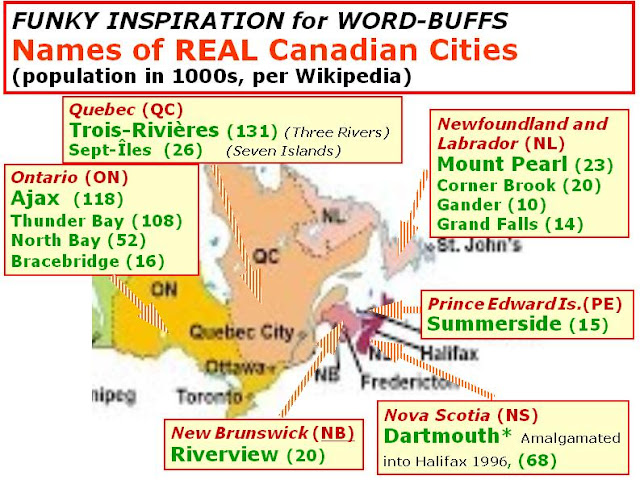 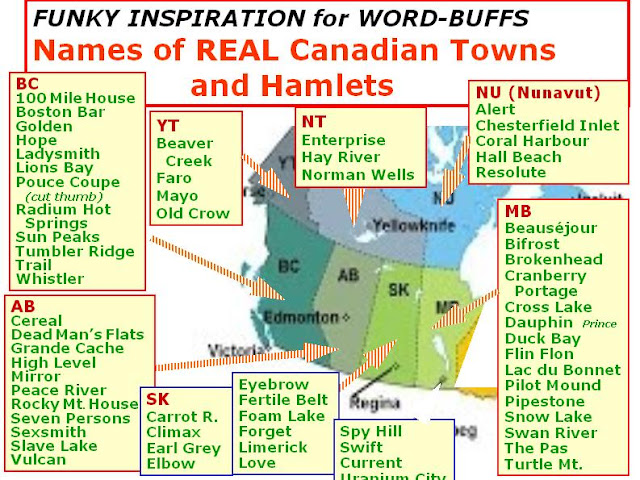 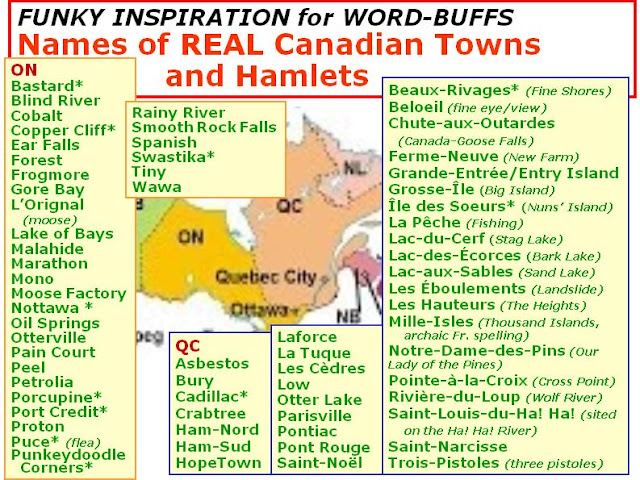 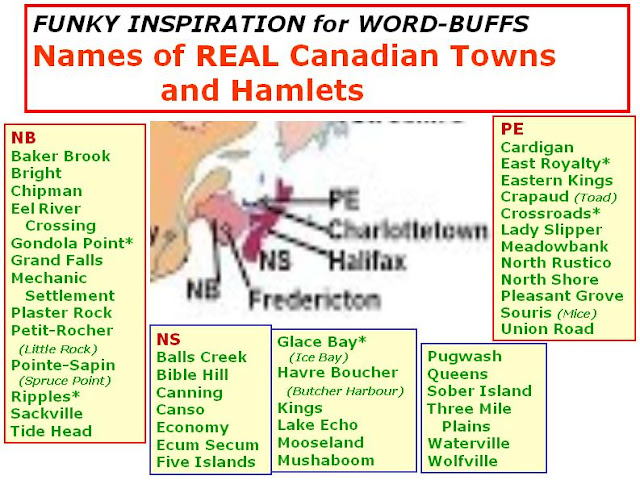 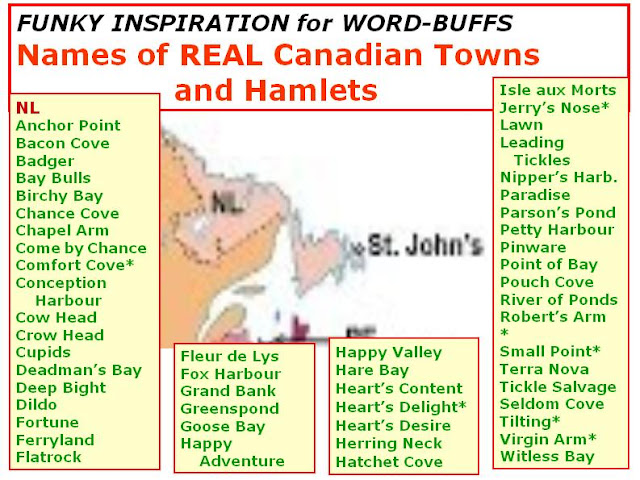 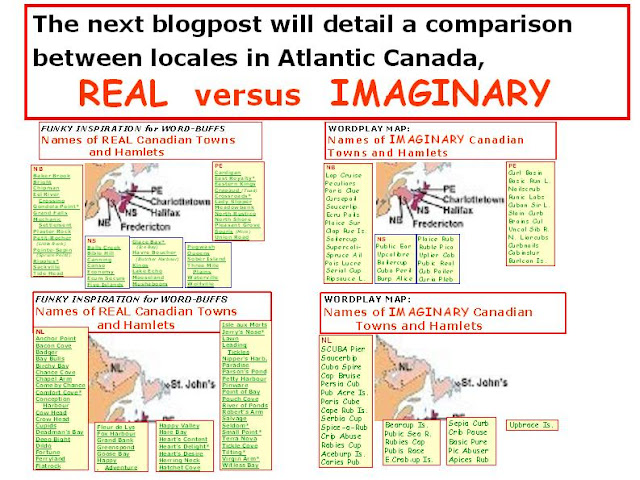